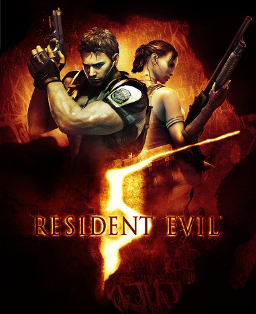 Up to this point, I have only reviewed movies since I have not played any new games recently. However, now that it’s August, the fall blockbusters will be rolling in and I’ll be reviewing games as I get to them. So in order to introduce my game reviews, I figure I’ll review Resident Evil 5, a game from 2009 that was re-released on the Xbox One/PS4 in late June. ( A note- this review will be reflective of the RE 5 on the Xbox One and PS4, which includes updated graphics and all DLC)

Story: The story follows Chris Redfield and his partner Sheva Alomar trying to stop a biological weapons attack in Africa. During their journey, they fight enemies from local villagers to infected mercenaries with the occasional evil mutated monster acting as boss battle. The story is not groundbreaking but does enough to keep the ball rolling from chapter to chapter. Additionally, the game respects both series veterans and rookies; the game brings back characters from past games and ties together some of the series’ loopholes yet as someone who was never too invested in the series, I never felt confused by what was going on.

Gameplay: The game follows the lead of RE 4; it’s a third person shooter where you cannot move when aiming your gun. You start out with a pistol and collect additional guns throughout (or alternatively you can buy them from the store between missions). And you can upgrade the guns too. With the number of guns and upgrades, you’ll find something that feels just right for your play style. In the beginning, enemies stick to close quarters combat (with some crossbow snipers mixed in as well), however there is an abrupt shift a little more than halfway through the game where enemies start using guns. This is a problem because the gun combat feels clunky; getting in and out of cover feels awkward and guns do so much damage that it is often infuriating. However, the boss battles are fun, exciting, and enjoyable, and even on multiple playthroughs. Additionally, quicktime events are scattered throughout, for better or worse.

Design: The story takes you through multiple areas, starting with a small village and ending in a volcano, and each area has its own feel to it. Nothing feels repeated and in addition to having different enemy types in each area, it feels like you’re doing a lot of traveling. Plus, the boss battles feature enough variation to keep things interesting.

Multiplayer: The game features two types of multiplayer; versus mode and coop. Versus mode is a type of deathmatch mode but overall is kinda “blah”. The mode was originally added in through DLC and was a result of the ’09 trend of adding multiplayer modes to single player games. Coop is a different story. The entire game, plus the two DLC story modes, can be played with a friend and it’s clear that is the way the game is meant to be played. When playing alone, your AI partner is annoying and likely to drive you nuts, while with a friend it’s exciting and you actually have someone you can rely on when you screw up.

Presentation: The game certainly looks better than it did on the 360 when I last played it, but it’s not that good. It plays it safe and results in an average presentation. However, the game played well and did not suffer from any dropped framerates or texture pop-ins.

Other: When it comes down to it, this is a steal. For 20 dollars, you get the entire base game plus all the DLC, including Lost in Nightmares and Desperate Escape, two story expansions that are both well designed. Whether you’ve played it before or never have, this is a great deal.

So wrapping up my first game review, Resident Evil 5 on the Xbox One and PS4 is a terrific deal. Despite some inconstancies in the gameplay, it is a solid game that deserves a second look.