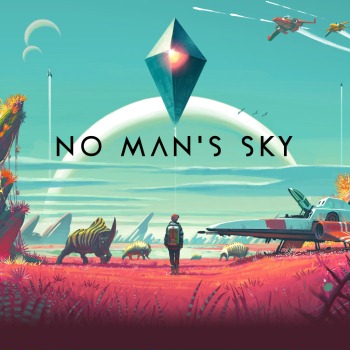 Hype is dangerous. Sometimes it can give life to a small project and bring it to a bigger and more mainstream audience, yet usually it is a dangerous thing that can hurt people’s perceptions of the project from the get-go. Based on most reviews (and reddit comments), it seems like No Man’s Sky is the latest victim of the hype train, as people were expecting more than what is actually in the game. However, I’m going to try to look and review this game as objectively as humanly possible. Let’s see if it is as ‘eh’ as the reviewers say. (Note: I played the PS4 version)

Story: So in terms of story, there isn’t really much of a story. If anything, it’s like a “story” (with emphasis on the quotes around story). You are a lone space traveler trying to reach the center of the galaxy. Along the way, you’ll meet various alien life forms and monoliths that’ll give you insight to the planets and systems you’re exploring. And that’s about it. It follows the Dark Souls approach to storytelling with the mantra “it’s there if you look for it.” While it won’t pull in casual gamers, it is enough to keep interested players going to find the next structure.

Gameplay: You start on a random planet far from the center of the galaxy with a broken ship and no resources. The game will then instruct you to start mining some resources to repair your ship. From there, you’ll slowly get instructions to get you to the next planet and then to the next system. Everything flows very well and even when it’s telling you to leave the planet, you’ll see numerous question marks that make you want to keep exploring. While things can get repetitive as you explore multiple planets, it is fun and always feels new (even if it’s the same structures). Additionally, you can scan the varied creatures and flora on each planet and rename everything (from creatures and locations to the planets and systems itself).

Design: The menus, both inventory and start, are a bit convoluted. You’ll find yourself going through random motions to get to whatever you want to do. Additionally, as you collect more and more schematics, it gets harder to quickly go through what you have and what you want to make. And on top of all that, the controls are a bit strange (sprint is pressing down on the right thumbstick). Again, you’ll find yourself pressing random buttons to get to the action you want. Plus, I’m taking points off for the almost seemingly blatant copy of the Destiny UI. It is shocking how similar the NMS UI is to Destiny.

Presentation: As I mentioned, you’ll see the same couple of buildings and ancient relics over and over and the aliens don’t vary much within their own race. Plus, after you see a handful of planets, things will start to be recognizable. However, that all being said, the game looks nice. Every time I get to a new planet, I feel like I’m in a whole other world (as cheezy as it sounds). The color pallets are beautiful and the soundtrack helps to complete the package. It brings me back to the first time I played the original Mass Effect and exploring deserted planets instead of trying to stop the “reapers”.

Other: Most games I play are fast paced action games that leave no room for breaks. Halo, Fallout, Resident Evil. They are all action road trips and there is nothing wrong with them, but every once in awhile, you need a calm relaxing game. For years, that game for me has been Minecraft and finally I have found another one. There is nothing better than sitting back and exploring a new planet that no one else has been to. It’s a Zen activity and is something that is needed from bigger AAA game developers.

I don’t know what people were expecting from No Man’s Sky but this is a great game. I’ll admit it is not for everyone as many gamers go to video games for fast paced action. Additionally, there might have been some broken promises that Hello Games made during development, but I decided to just stick with what I had, which I enjoyed.For those looking for a break from the monotonous action of AAA games or just want to sit back and explore deep space, this is the game for you.