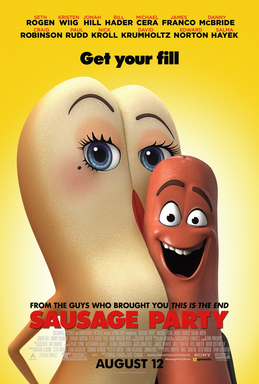 So I’ve seen some dumb movies in my time (and to maintain my honor I will not reveal such films) so the idea of seeing a film about talking groceries isn’t that crazy of an idea. That being said, I was not expecting this film to be good when I went into it. So imagine my surprise when I found it to be good. And pretty damn good at that.

Story: The story follows Frank, a hotdog, and Brenda, a hotdog bun, and their adventure in trying to discover the meaning behind their existence. Along the way, they meet other groceries (along with some other household products) of various stereotypes and have to deal with many different problems along the way. You think I’d be joking when I say the story is good but it is. There are more twists and turns than are in most big summer blockbusters and the fact that I actually cared for a romance between a hotdog and a bun shows just how good it is.

Acting: Usually I don’t pay too much attention to the cast in an animated movie but every voice actor is absolutely perfect for their characters. From Seth Rogan as the hotdog hero to Edward Norton playing a Jewish bagel, it’s just crazy how good everyone is and how well they match their characters. The biggest problem with the cast is Salma Hayek as Teresa del Taco. She’s kind of forgettable in the grand scheme of things but honestly I’m just nitpicking. Overall, it’s fantastic.

Presentation: Billed as a spoof of Disney and Pixar movies, the animation is the most important part of the feature and it is shockingly good. I wouldn’t say it is better than some of the stuff that comes out of Pixar but for a film not associated with a major animated movie studio, it’s impressive. I’m also giving bonus points for how they portray the majority of the movie from the few bits with humans. Whenever a human is on screen, the picture gets darker and grayer and helps to show the ‘evil’ nature of humans. It was a very small touch but it was the perfect addition.

Effect: I never would have thought that a movie about talking groceries would do such a good social commentary of different topics ranging from the question of Palestine to the existence of God but I’d be dead wrong. Just when I thought the last good joke was behind us, they’d pull another one out of nowhere. Again just nitpicking but they could have gone deeper with some of the jokes but maybe it was better to leave well enough alone.

Other: This is definitely a movie to see with friends. It is fantastic and should be enjoyed in a group setting. I do have two final quick complaints. 1, this is a kind of Hangover-esque movie in that it is so vulgar that it can be a bit tiring at times. 2, right near the end, there is a huge shift to something that…. well calling it odd and strange is an understatement. It’s not bad (it’s actually kinda funny) but it just comes out of blue and it’s pretty jarring.

Not only is this the best comedy I’ve seen in a while but it’s one of the best movies I have seen this summer. I never would have expected Sausage Party to be the gem that it is. It is without a doubt a must see.

One thought on “Sausage Party Review”