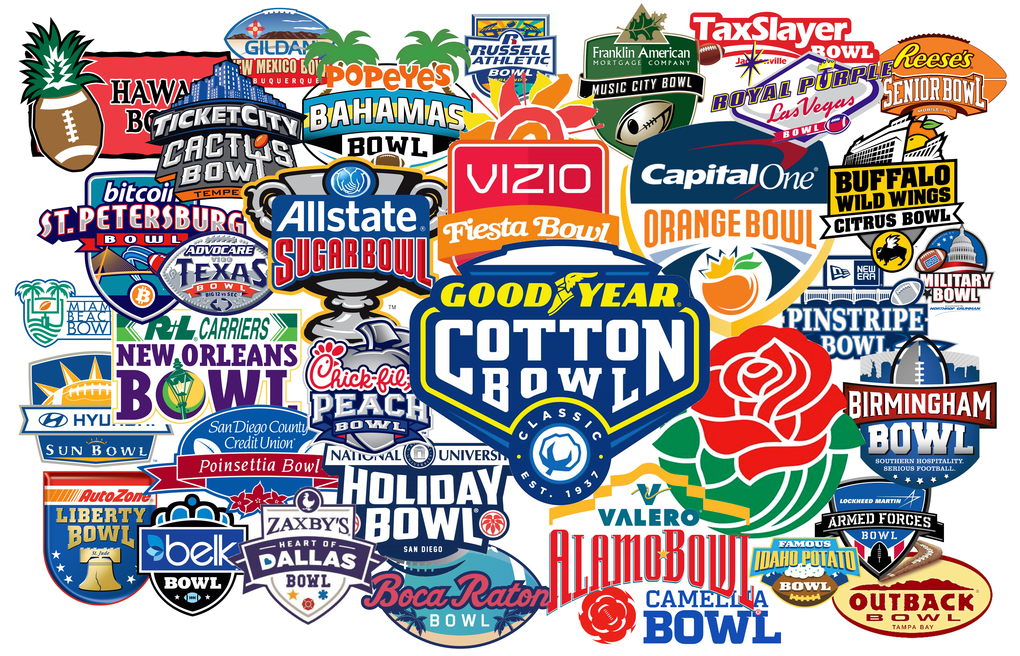 Well ladies and gents, it’s the most wonderful time of the year and I’m not talking about Christmas. Nope. It is bowl game season!! Nothing but (almost) non-stop college football from now until the National Championship Game on 1/9. For a football fan, it is a sight to behold.

Usually I will go through the bowl game list and say yay or nay for each game so I figured why not do it here. Now, instead of listing every game, I’ll highlight the games I am looking forward to most and then post my full predictions at the end. So here we go!!!

Louisiana Tech vs Navy in the Armed Forces Bowl: I love watching Navy play and despite finishing 9-4, the Midshipmen ended up in one of the lower bowl selections. Oh well. I’m hoping those young lads will finish the season with a solid win over the Bulldogs. Winner: Navy

Boston College vs Maryland in the Quick Lane Bowl: This is interesting to me since Maryland once was in the ACC but ran away and moved to the Big Ten. Both teams finished 6-6 but BC finished the season on a strong note to qualify for this game. I’m calling this for BC #GoACC! Winner: Boston College

Wake Forest vs Temple in the Military Bowl: This one is hard for me. While I love my Demon Deacons, I have to freely admit that the chances of Wake (at 6-6) beating Temple (at 10-3 and AAC Conference Winner) is slim. Plus the whole #Wakeyleaks scandal probably won’t help my poor Deacs. Oh well. Here’s to me hopefully being wrong. Winner: Temple

Miami vs West Virginia in the Russell Athletic Bowl: I know I’m going heavy on the ACC games but what would you expect from a Wake fan. It also helps that my dad is an alumnus of Miami’s law school. Now, the canes haven’t had a great year while West Virginia finished at #16. STILL. I feel like Miami will play up to the level of the game and triumph over the Mountaineers. Winner: THE U

TCU vs Georgia in the Liberty Bowl: I don’t really know why this game interests me but it just kinda stuck out to me. Don’t know much about either team but I’m going to default to the SEC on this one. Winner: UGA

Louisville vs LSU in the Citrus Bowl: Now when I first went through the games, I chose Louisville here but I’ve reconsidered my opinion. First, I realized that LSU had a better year than I had originally thought. Second, Louisville did not have a strong ending to their season. And third, Wake Forest was beating Louisville 12-3 after one half of football (just ignore the fact that the game ended 44-12). Plus the fact that those a-holes at Louisville had the balls to say they received Wake’s game plan but “didn’t need it” makes this personal for me. GEAUX TIGERS!! Winner: LSU

FSU vs Michigan in the Orange Bowl: FSU has had a poor season yet somehow finished 9-3, whereas Michigan finished 10-2 with their only loses coming in close games. This will be close but I think Michigan is the more mature team and will pull ahead early and keep the lead for the duration. Winner: Michigan

Oklahoma vs Auburn in the Sugar Bowl: I’m not too in the know with these two teams but I’ll pick Auburn for two reasons. 1, the SEC. And 2, Oklahoma and bowl games usually don’t go well for the Sooners. Winner: Auburn

Penn State vs University of Southern California in the Rose Bowl: I know USC had a decent year but this game is absolutely Penn State’s to lose. After winning the Big Ten and then getting screwed over by the CFP selection committee, Penn State must have a big chip on their shoulder and rightfully so. They will win this easily. Hands down. Winner: Penn State

Clemson vs Ohio State in the Fiesta Bowl: I could go either way on this one but I think that Ohio State is just the better team in this situation. Too many times this season, Clemson has given up a lot of points and I think Urban Meyer will take advantage of that. Winner: Ohio State

Alabama vs Washington in the Peach Bowl:  I hate it but there’s no way Washington wins. Winner: Alabama

THE NATIONAL CHAMPIONSHIP GAME IN TAMPA: Alabama vs Ohio State: This will be a close game. Ohio State will push Alabama to their limits but ultimately Bama will come out on top. Unfortunately once again. Winner and Two Time National Champion: Alabama Crimson Tide

Well there you have it. Again, if you’re interested, my entire bowl prediction list can be found through the link below. Enjoy the football and have a Merry Bowl-mas!

P.S: I’ll update that spreadsheet as the bowl season progresses.