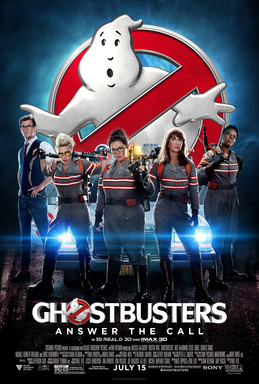 <sigh> I really didn’t want to do this. I know going into this review that I’ll only upset people, but it was in the vault and I need to empty it out. So. Here goes nothing…

Story: The story is pretty much what you’d expect. Scientists believe in ghosts. No one believes in them. Scientists find ghosts. Ghosts attack the city. Scientists stop the ghosts. Scientists save the day. The biggest sin of this movie is that it pulls out multiple cliché-cards only to use them for several seconds before throwing them away. An example of this is how Kristen Wiig’s character is fired from her teaching position and at the time it’s a big deal to her, but after she packs up and leaves, she doesn’t thing about it again. It’s just odd.

Acting: So full disclaimer, I don’t like Melissa McCarthy or Kristen Wiig. I must’ve been among five people to not like Bridesmaids. So it’s not that surprising for me to say that they are pretty forgettable in this movie. I will say that I saw this with a friend and she also thought that they weren’t good. What I will say is that, Kate McKinnon and Lesie Jones are great. It made me wish they were the main characters rather than the former bridesmaids. The rest of the cast is pretty blah too and the cameos are just kinda sad.

Presentation: Ok the movie looks good. I’ll give it that. This is what a reboot of a 20-year-old movie should look like. Everything looks new and good yet still has the feels of the original. However, the soundtrack is pretty meh and there are a couple of versions of the theme song that were just annoying. I’m fine with updating the theme song but they should stick to that rather than trying to use both (or in this case both plus another one).

Effect: Going back to my Mike and Dave review, the jokes were pretty 50/50. Some things were dumb but there were some good jokes sprinkled in there too. Just enough to keep me interested.

Other: I think that despite the negative reaction from the internet, this is an ok movie. I think it could be enjoyable to see with friends but if you want to check something else out, then you’re not missing much.

But wait. There’s more. I know that this score is not reflective of everyone so let me personalize it a bit more.

If you like awkward comedy, are a fan of Bridesmaids, and not annoyed by reboots, then you’ll like this movie. Add one point. Score (for fans): 7.2

If you hate most modern comedies, hate McCarthy and Wiig, and the thought of a reboot makes you want to club baby seals, then you won’t like this. Remove two points. Score (for da h8rs): 4.2