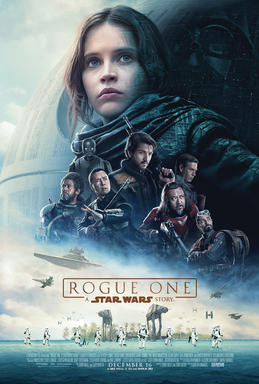 Here it is folks! Rogue One! My hype for this movie is so grand it cannot be accurately be described in words, so instead of faffing around with intro I’ll just get right into it.

Story: It’s the prequel to a New Hope. Jyn Erso has to join up with the Rebel Alliance to get the plans to the Death Star so they can destroy the Empire’s super weapon. It’s a simple premise but it takes you on a journey throughout the galaxy going to multiple planets and through multiple different scenarios. Where I thought Force Awakens was a very simple story (with not much going on), Rogue One is more complex and mature and has much more going on. Sure there are some plot holes here and there but overall the story is perfect and in my opinion is the most compelling story in a Star Wars movie to date.

Acting: The cast as a whole is fantastic. Felicity Jones is perfect as Jyn and delivers one of the best performances in Star Wars history. Diego Luna stars as Jyn’s cohort and is “meh” in the beginning but pulls it together at the end. Mads Mikkelsen once again nails his role and so does Forest Whitaker. Plus Alan Tudyk (aka Steve the motherfucking Pirate from Dodgeball) is amazing as K-2SO. My new favorite droid! I could go on and on but I won’t. Bravo to the casting department on this one.

Presentation: Ok, flaws first. Or flaw. There are two characters (who shall not be named) who are computer generated and one of them looks off. It’s an uncanny valley sorta thing that just stands out in the specific scenes. That being said, everything else looks and sounds amazing. Not only do things look great but they look real. Space ships, aliens, planets. Everything is grounded and truly feels real, something that the prequels never accomplished. Plus the soundtrack, while a little corny at times, is fantastic.

Effect: This movie is perfect. Everything about it. It feels like Star Wars but also doesn’t at the same time. This is a WWII movie but set in the Star Wars universe and it is astonishing. There is weird scene or two in the first half of the movie but the second half is nothing short of perfect. I think that this movie is the best Star Wars movie. Period. It completely nailed trying to do a more “adult” Star Wars movie while simultaneously making the best Star Wars film ever made to this point. It stands well on its own and (most importantly) it makes a New Hope better. Watch this film and then go home and watch Episode IV. You’ll see what I mean. Simply put. It. Is. Perfect.

Other: Again, there are some flaws here and there and some scenes probably should’ve been cut as they didn’t really make much sense but that is just nit-picking. This movie is great. Go see it. Like now. Why’re you still reading. Go watch it.

I think I’ve said my piece. Garth Edwards deserves a medal for this and if Episode VIII is half the Star Wars movie that this one is, then I’ll be happy. Easily the best Star Wars movie and one of the best movies of 2016.