[Edit: Apparently psychology is a science and thus Mr. Keller earned a M.S. and not an M.A. The article has been edited accordingly]

Back in October, I wrote an article on the then recently announced Nintendo Switch and reacted to the console’s reveal trailer. I was quite excited, despite the significant number of problems with the console that had been reported, and I decided to pull the trigger and grab one of these bad boys at launch. I’ve had it for a little over a two weeks and I thought I’d share my opinions on Nintendo’s new console/handheld hybrid, as well as the newest installment in the Zelda franchise, Breath of the Wild. 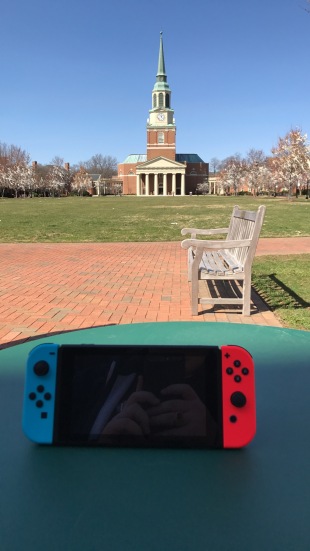 Two of my favorite things in the world. Wake Forest and Video Games!

Impressions first. The Nintendo Switch is very sexy. Unlike what the Wii U gamepad is, the Switch looks and feels like a piece of hardware that an adult can use. Without the Joycons (the small controllers on the side of the unit), the Switch looks just like any old tablet. This might seem like a weird thing to point out, but after making several products that looked like over-priced Fisher Price toys, it is good to see that Nintendo has joined the 21st century.

One is great and one is awful. Try to figure which is which…

Now, while it can be played both on the go in handheld mode and on a TV, I have only played it in handheld mode and for good reason; it is really damn comfortable. It doesn’t feel too big or too heavy. It is just right. And while the screen resolution might not be the best in the world, it looks perfect for a screen that is only a few inches in front of you.

So far after a few weeks, I am totally sold on this device. As for the general public, it has been a slow roll but people are really starting to fall in love with the Switch. Here is what some real people had to say about it.

“It feels so good in my hands.”
-Kameron Sipowski

“They took a 3DS, added pixels, and took out a screen”
-Brian Keller, M.S.

“Is that Zelda?”
-Adriana Craver

“I can’t wait to play this on the toilet.”
-anonymous

#PrettyMuch (Shoutout to Mashable for this gem)

Ok. Back to being serious. There are some technical problems but as a whole, this is the best handheld gaming device that you can buy at the current moment and while 300 dollars might be a tad too steep, it is still amazing. Of course, if you wait you will get a better version of the Switch but at the current moment, this is phenominal if you’re interested in a new handheld gaming device.

Now. The biggest problem with the Switch at this point is that the only great game on it is Zelda: Breath of the Wild (BotW). However, BotW seems to be one of the best reviewed games of the decade. I have never played a Zelda game before (yeah yeah I know take a deep breath), and so far I am really enjoying it. It is fun to explore the game’s open world and serves as the perfect game to play on the go. You get some free time, play a little bit, put it down, and then rinse and repeat. Or. Alternatively, you could just binge the game for hours on end in TV mode (which I haven’t done).

However! I do not think that this game is as perfect as everyone says (except for say Jim Sterling) and I’m not sure if it’s because I’m not a Zelda fan and just do not understand the magic or everyone else has the green tunic Zelda hype over their eyes and cannot see the flaws in the game. Regardless, it’s still a really good game and if I had to review it, the break down would be as follows:

Now with my Zelda “review” out of the way, time for the “review” for the Switch itself. If I had to give the console a score, I’d give it an A out of Purple. Let’s be honest. Reviews for hardware is sort of pointless (though you could say that reviewing games and movies are pointless too but I say to you shut up). Hardware should be reviewed in the following ways: Yes, No, Eh. With that being said, I would give this a solid Eh. The Nintendo Switch is great. It is really great and has one of the best games of the year on it. HOWEVER, if you’re not dying to get it then I’d hold off. Hardware will always improve and waiting will only increase the numbers of games you can play when you grab it. Well there you have it. Enjoy ladies and gents.

TLDR: If you really are antsy for a new handheld, then the Switch is for you and if you can wait, then wait. Also Zelda is Zelda.

One thought on “Game Talk: Switch Impressions and Zelda Review”