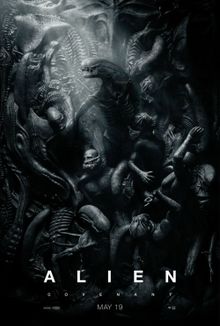 Welcome back fam! I took a break last week to go to graduation but have no fear! I’m back and here with a proclamation. Alien Covenant sucks. Like really really sucks. Sucks like one of those fancy Dyson vacuum cleaners. Let us dig in and see just how bad this horror flick is.

Story: This movie takes somewhere between Prometheus (which I didn’t mind too much fyi) and the original Alien. The story is as follows: a colonization ship picks up a rogue transmission and decides to venture off course and see if they can find humans in deep space, and as anyone with a brain could guess, things take a turn and most everyone (spoiler) dies. The movie is quite unoriginal, feels very trope-y, and is filled with boring and meaningless cliches, that are stolen from every horror movie under the rainbow. Moreover, the lore that this film adds to the franchise as a whole actually hurts the movies that came before it. As an example, this film dives into the origin of the Xenomorph and reduces a once great and utterly terrifying villain into a dull pet. While some would say that Prometheus was a horrible movie, I’d say it wasn’t that bad and it is certainly leagues ahead of where Covenant is.

Acting: Like with Prometheus and the most recent X-Men moves, this is the Michael Fassbender show and like with the other films he’s been in, his performance is blah. Fassbender doesn’t show any originality and acts (for lack of a better word) like he doesn’t want to be there. He plays two characters (whoops…did I spoil that?) and both of those characters doesn’t add up to one mediocre character. Katherine Waterston is the ‘star’ of the film and, asides from looking like Sigourney Weaver, she doesn’t feel real. Perhaps it’s the writing. I don’t like knocking on an actor or actress in a poorly written movie but even with that in mind, it’s as if she isn’t trying. The same can be said for Danny McBride, though at least I felt some emotion for his character. James Franco and Guy Pearce are also in the movie for a New York Minute but that’s really it. Overall the acting is just bad.

Presentation: This would be the ‘best’ part of the movie but even here I can’t give the film that many points. Some of the space scenes are pretty but it’s not that technically appealing. The ship looks like something from an old Halo game and the planet is like a house with a smoke machine that’s been left on too long. And what about the music? Well I’ll refer you to my earlier point about horror cliches.

Effect: This movie is boring. Did you miss that? Ok. I’ll say it again. It’s boring. You don’t care about any of the characters so when they die, it doesn’t matter. They’re just cannon fodder. Additionally the film acts like Passengers for the first 30/45 minutes and expects us to be surprised when people start to die. Earth to Mr. Scott. It’s an Alien movie. Either build up the tension properly or jump right to the Xenomorph killing things.

Other: As with the other bad movies I’ve review this year, Covenant is too long. Like a solid hour too long. This movie isn’t worth seeing in theaters and it isn’t worth watching in your home. Just don’t. If you want to watch a good Alien movie, see the original or James Cameron’s Aliens and if you want to watch a bad Alien movie, well Alien vs. Predator is good for a laugh.

What a sad day for Alien fans and horror fans alike. Oh well. I guess there’s always next time.

One thought on “Alien Covenant Review”